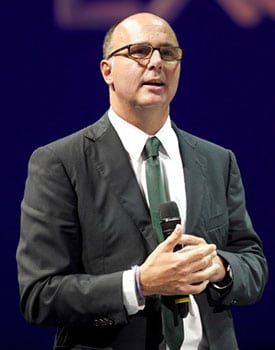 Bio: Andrea Guerra is the CEO of Luxottica Group, the global leader in the design, manufacturing and distribution of eyewear. Mr. Guerra joined Luxottica in 2004.

Mr. Guerra had previously spent ten years at Merloni Elettrodomestici, five of which as the company’s CEO. At the time he was the youngest CEO of any Italian listed company. Under his leadership, Merloni, now Indesit Company, became Europe’s number-three white goods manufacturer.

Mr. Guerra’s professional experience includes working for Marriott Italia, the Italian subsidiary of the Marriott corporation. Over the five years he spent with the company, Mr. Guerra held various positions in marketing and operations and played a key role in setting up Marriott’s facility management division in Italy.

Andrea Guerra is 41 years-old, holds an honors degree in Economics from La Sapienza University in Rome. He is married and has three children.

Andrea Guerra is an Honorary Fellow of the Academy of International Business as the recipient of the 2008 AIB Fellows International Executive of the Year Award.