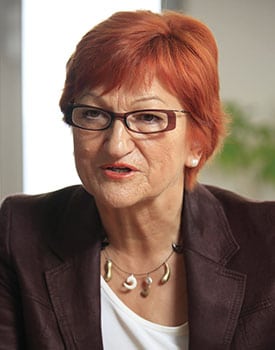 Professor Purg has been an innovator in management education, incorporating the arts and artistic processes into management education and building an ethics component into the curriculum of into all the longer management programs at Bled since its inception. By last year, the IEDC Bled School of Management was recognized as being among the 100 top business schools in the world for innovation by the Aspen Institute’s 2009-2010 edition of Beyond Grey Pinstripes. IEDC Bled School of Management was the only school from Central and Eastern Europe to receive such recognition.

Prof. Purg has already received many awards in recognition of her achievements: she is a Fellow of the International Academy of Management and she has received honorary degrees from three institutions (Moscow State University of Management, Estonian Business School and MESI – Moscow State University of Economics, Statistics and IT). In 2001, the President of the Republic of Slovenia awarded her the “Honorary Order of Freedom” for her contribution to management development in Slovenia and CEE. She is a role model both for established professionals and for young women in management and in academia, and she serves on the Advisory Board of the Women’s Forum for the Economy and Society. Prof. Purg is also a member of European Cultural Parliament (ECP), a member of the UN Global Compact Taskforce to develop the principles for Responsible Business Education, and President of UN Global Compact Slovenia.

Danica Purg is an Honorary Fellow of the Academy of International Business as the recipient of the 2010 AIB Fellows International Educator of the Year Award.