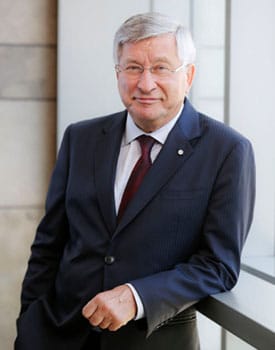 Bio: Dezsö J. Horváth is Dean and Tanna H. Schulich Chair in Strategic Management at the Schulich School of Business, York University (Toronto, Canada), where he has been a member of the faculty since 1977. Dr. Horváth received his Electrical Engineering, MBA and PhD degrees in Sweden. Following an early career in research and development with the Swedish multinational ASEA (now ABB) in the electrical industry, he was appointed to senior academic positions at Swedish and then Canadian universities. In addition to publishing books and articles on strategic management and international business, he has consulted widely in these fields to major corporations and to government.

Since becoming Dean in 1988, Dean Horváth has worked with internal and external stakeholders to position Schulich as “Canada’s Global Business School™”. It now has strategic partnerships in more than 75 countries worldwide, including academic exchange agreements with more than 70 leading international business schools. Innovative and diverse, the School offers degrees at the postgraduate (PhD), graduate (MBA, International MBA, MBA/LLB, MBA/MFA, MPA) and undergraduate (BBA, International BBA) levels. It also offers North America’s first cross-border executive MBA degree, the Joint Kellogg-Schulich EMBA. In executive education, the School’s program is the largest in Canada. Schulich is currently ranked 22nd globally (7th outside the US) by the Economist Intelligence Unit (EIU), the business research and intelligence arm of The Economist magazine, 22nd globally by the Financial Times of London (6th outside the US). BusinessWeek and Forbes rank Schulich among the top 10 non-US schools in the world.

In addition to being a faculty member at York University, Dean Horváth is a Director of Dofasco Inc., Inscape Corporation, Westport Innovations Inc., and The Toronto International Leadership Centre for Financial Sector Supervision; an Advisory Board Member of the Corporate Social Responsibility Advisory Council, EDC (Export Development Canada), of the UC Berkeley-St. Petersburg University School of Management Program, and of The Czech Management Centre, Prague, The Czech Republic, of which he is also a Co-Founder.

In addition to his AIB Dean of the Year award, Dean Horváth was invited to become a Member of the Board of Advisors on the “Canada Global Leadership Initiative” by the Canadian Council of Chief Executives (CCCE) (1999-2000); a Fellow of the World Economic Forum, Geneva, Switzerland (1995 to present); a Member of the Premier’s Council of Ontario (1991-1995); and to speak at a number of ICC (International Chamber of Commerce) conferences. In 1995, he received the B’nai Brith Canada Award of Merit.

Dezsö Horváth is an Honorary Fellow of the Academy of International Business as the recipient of the 2004 AIB Fellows International Educator of the Year Award.