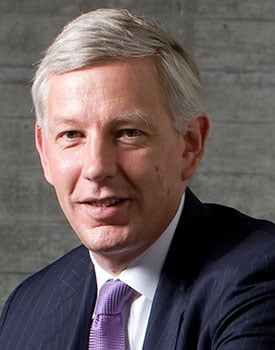 Bio: Dominic Barton is the Global Managing Director of McKinsey & Company. In his 27 years with the firm, Dominic has advised clients in a range of industries including banking, consumer goods, high tech and industrial. Prior to his current role, Dominic was based in Shanghai as McKinsey’s Asia Chairman from 2004 to 2009 and led the Korea office from 2000 to 2004.

Dominic is an active participant in international fora including Davos, the St. Petersburg International Economic Forum, Les Rencontres Économiques d’Aix-en-Provence, the Asia Business Council and the China Development Forum.  He has authored more than 80 articles on the role of business in society, leadership, financial services, Asia, history and the issues and opportunities facing markets worldwide.  Dominic is a co-author, with Roberto Newell and Greg Wilson, of Dangerous Markets: Managing in Financial Crises (Wiley & Sons, 2002) and China Vignettes: An Inside Look at China (Talisman, 2007).

Dominic leads McKinsey’s work on the future of capitalism, long-term value-creation and the role of business leadership in society.  This is a set of research initiatives and projects to convene organisations and leaders for constructive action. One such project was a task force on Inclusive Capitalism, which Dominic co-led with Lady Lynn Forester de Rothschild (sponsored by the Henry Jackson Society, a London-based think tank).  The task force – comprised of business and public leaders in the US and UK – developed approaches for engaging and scaling business actions to address issues that create both social and economic value.

He is a member of the Canadian Prime Minister’s Advisory Committee on the Public Service, a Trustee of the Brookings Institution, a member of the Singapore Economic Development Board’s International Advisory Council, an advisor to the Asia Development Bank, a member of the Advisory Board for the China Development Bank Capital Group and a Board Member of the Asia Pacific Foundation of Canada.  Dominic has received multiple awards for his business leadership and contributions to the communities in which he has lived – for example, in February 2013 Dominic received the Order of Civil Merit (Peony Medal) from former President Lee of South Korea.  He is a Rhodes Trustee and an Honorary Fellow at Brasenose College, Oxford.  Dominic is also an Adjunct Professor at Tsinghua University, Beijing.
—

Dominic Barton is an Honorary Fellow of the Academy of International Business as the recipient of the 2014 AIB Fellows International Executive of the Year Award.