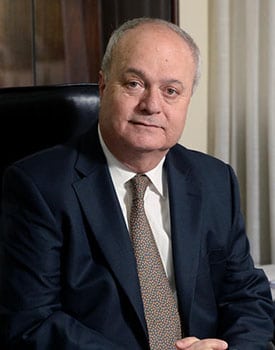 Dr. George Khalil Najjar is the Provost of Lebanese American University.  As the university’s chief academic officer, Dr. Najjar oversees a wide array of academic program planning, teaching, and research-related affairs across LAU’s seven schools. He is also at the center of the academic strategic planning process, long-term institutional positioning, and global partnerships. Into this context, Dr. Najjar brings an enterprising outlook forged over decades of academic and administrative experience as a faculty member, vice president and dean at the American University of Beirut (AUB).

During his 12-year tenure as founding Dean and Professor of the Suliman S. Olayan School of Business (2000-2012), Dr. Najjar led the school to accreditation and regional preeminence.

From 1997 to 2006, he doubled as vice president for Regional External Programs at AUB. Prior to that, he headed the teams that developed feasibility studies for several educational institutions, among them the University of Sharjah and the University of Bahrain. At the latter, he went on to serve as founding dean of its School of Business (1987-1997) and Vice President for Planning (1991-1995).

Dr. Najjar is widely published in peer-review management journals as well as edited academic volumes. He has excelled at designing and delivering executive education programs at universities and other venues in the Middle East, taught countless business courses, and served as a consultant to many businesses.

Throughout his rich career, he has distinguished himself for his strategic vision covering areas such as research management, fundraising, institution-building, institutional and professional accreditation and international networking.

Dr. Najjar received his Ph.D. in General Management from the University of Southern California in 1975 and a master’s and bachelor’s degrees from AUB in 1971 and 1969, respectively.

He serves as member of the Board of Trustees of three universities—Dhofar University, Oman, since 2004; University of Sharjah, UAE, since 2001; and University College of Bahrain, since 2006-as well as member of the Board of Directors of the National Bank of Kuwait, Lebanon, since 2010. He currently serves as special advisor to the president of AACSB for the Middle East and Africa. He has been recently awarded the highly prestigious Academy of Strategic and Entrepreneurial Leadership’s John J. Fernandes Strategic Leadership Award.

George Najjar is an Honorary Fellow of the Academy of International Business as the recipient of the 2017 AIB Fellows International Educator of the Year Award.