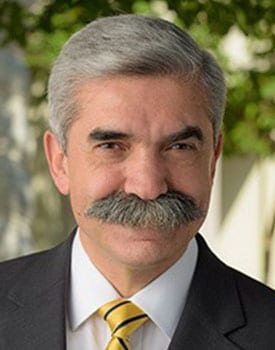 Jaime Alonso Gómez has been a leader in international education, leadership and business development. His work experience and educational training have been international in character and global in impact. He obtained a B.Sc. (Industrial Engineering) at Monterrey Institute of Technology in Monterrey, Mexico; a M.Sc. (Applied Systems Design) at The University of Waterloo in Waterloo, Canada; and a Ph.D. (Applied Economics and Managerial Science) at The Wharton School of The University of Pennsylvania. Dr. Gómez conducted post-graduate research work on Quality Management and Engineering at The Association for Overseas Technical Scholarship in Tokyo, Japan.

Dr. Gómez believes in education in its most comprehensive interpretation, which is as the foundation for societal development and wealth creation. This definition includes the availability of better jobs and greater income for individuals. It also serves as a powerful enhancer and energizer for students to become socially responsible individuals. These students realize that those with access to education, like themselves, are implicitly instilled with a moral obligation to others and to society as a whole. Twenty-five years ago, while working as young engineer coordinating groups of workers in steel and petrochemical companies, this profound belief drove Dr. Gómez into a career in education,

Jaime Alonso Gómez has been a researcher and consultant for companies and/or institutions in more than 100 organizations in more than 40 countries. Formerly a corporate executive and project engineer, Dr. Gómez joined Monterrey Institute of Technology in 1982. As an international scholar, He has taught students from all the Americas, Europe, Far and Middle East, Africa, and is a frequent guest speaker around the world. His areas of interest are: Strategic Management and International Operations and Management.

Jaime Alonso Gómez is an Honorary Fellow of the Academy of International Business as the recipient of the 2005 AIB Fellows International Educator of the Year Award.