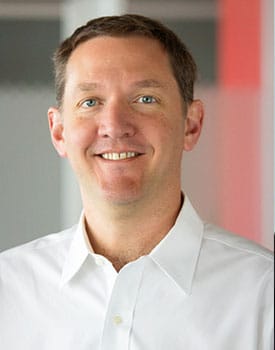 Bio: James Whitehurst is the President and Chief Executive Officer of Red Hat. Mr. Whitehurst began his career at The Boston Consulting Group (BCG) in Chicago. Over ten years with the firm, he also worked in its Hong Kong, Shanghai, and Atlanta offices. While at BCG, Mr. Whitehurst consulted to numerous clients across an array of industries. His particular focus was in corporate development and valuation, and he held several leadership roles in the Corporate Development practice area. He was named a partner of the firm in 2000.

While serving as a partner at BCG– at noon on September 11, 2001– Mr. Whitehurst was asked by Delta Air Lines to join the airline as Acting Treasurer. In this capacity, he led Delta’s same week secured debt offering (September 17, 2001) – winning the Thomson-IVR “Deal of the Year” for reopening the capital markets. He then joined Delta full-time in January 2002 as Senior Vice President – Finance, Treasury and Business Development. In 2004, Mr. Whitehurst was named Chief Network and Planning Officer, a position from which he drove Delta’s significant international expansion. He was named Chief Operating Officer in 2005 and took responsibility for all aspects of the airlines operations, including sales, marketing, operations and strategy. In this role, he successfully led Delta’s turn around through bankruptcy restructuring.

Mr. Whitehurst joined Red Hat, the leading open source software company, as President and CEO in January 2008. Over the past four years, he has more than doubled the company’s revenue, and tripled is market capitalization. He has lead a substantial global expansion, opening development centers and sales offices around the world.

Mr. Whitehurst graduated from Rice University in Houston, Texas in 1989 with Bachelor of Arts degree in Economics and Computer Science. He also attended Fredrick Alexander University in Erlangen, Germany and holds a General Course degree from the London School of Economics. He received his Masters in Business Administration from Harvard in 1994.

Mr. Whitehurst resides with his wife, Lauren, and ten year old twins in Durham, North Carolina. He is a member of the Board of Directors of Digital Globe and The Conservation Fund. He also sits on the executive committee of the North Carolina Chamber of Commerce and the Duke Medical Board of Visitors.

James Whitehurst is an Honorary Fellow of the Academy of International Business as the recipient of the 2012 AIB Fellows International Executive of the Year Award.