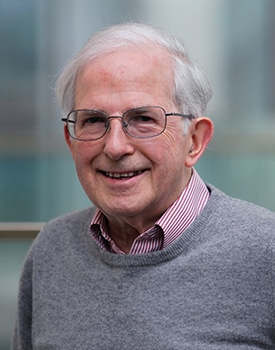 Bio: John Child holds the Emeritus Chair of Commerce at the Birmingham Business School, University of Birmingham, UK.  John has an M.A. in Economics and a Ph.D. in Management both from the University of Cambridge, which in 1984 also awarded him a Sc.D. for outstanding scholarly work. He has been awarded Honorary Doctorates by Aalborg University, Denmark, Aston University, UK; Helsinki School of Economics, Finland; and Corvinus University, Budapest.  His career started with posts in marketing and HR at Rolls-Royce Ltd.

From 1986 to 1989 John served as Dean of the Aston Business School. During 1989-90, he was seconded to the position of Dean and Director of the China-European Community Management Centre in Beijing. He was appointed to the Diageo Chair of Management at Cambridge in 1991. Between 1998 and 2000, he was also the Distinguished Visiting Professor at the University of Hong Kong.

John has published over 150 articles in leading journals and 27 books, including Corporate Co-evolution, co-authored with Suzana Rodrigues, which won the 2009 Terry Book Award of the Academy of Management.  His latest books are Hierarchy (Routledge 2019) and a new co-authored edition of the leading text on Cooperative Strategy (Oxford University Press 2019). His research interests include management in China; organization and performance of strategic alliances; internationalization of SMEs; and the evolution of less-hierarchical organizational forms.