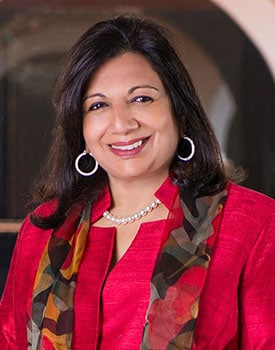 Bio: Kiran Mazumdar-Shaw is the Chairperson and Managing Director of Biocon Limited. A pioneer of the biotechnology industry in India and the head of the country’s leading biotechnology enterprise, Biocon, Ms. Kiran Mazumdar-Shaw is a highly respected businesswoman. Ms. Mazumdar-Shaw, a first generation entrepreneur, has made her country proud with a globally recognized biopharmaceutical enterprise that is committed to innovation and affordability in delivering world-class therapeutics to patients globally. As the first woman brew master of India, with a pioneering spirit to make a difference, she leveraged her knowledge of fermentation science to pursue the road less taken and build an innovative biopharmaceutical company.

Today, Biocon is India’s largest biopharmaceutical enterprise and the only publicly listed biotechnology company. It is credited with developing an indigenous recombinant human insulin based on proprietary fermentation technology, which is now available in over 50 countries. Under her leadership Biocon has become a well-recognized global brand.

She is highly respected in the corporate world and has been named among TIME magazine’s ‘100 Most Influential People in the World.’ She has also featured in Fierce Biotech’s list of ‘World’s 25 Most Influential People in Biopharma’ and is recognized among Forbes ‘100 Most Powerful Women’ globally. U.S.-based Chemical Heritage Foundation recently conferred Ms. Mazumdar-Shaw with the ‘2014 Othmer Gold Medal’ and Germany-based Kiel Institute for the World Economy awarded her its coveted ‘2014 Global Economy Prize’ for Business.

Ms Mazumdar-Shaw is also an Independent Member of the Board of Infosys, a global leader in consulting, technology and outsourcing solutions. She is also the Chairperson of the Board of Governors of the Indian Institute of Management, Bangalore.

In addition to her formal qualifications of a Brewmaster from Ballarat University, Australia; Ms Mazumdar-Shaw holds several other honorary degrees from renowned international universities like Trinity College, Dublin; University of Abertay, Dundee; University of Glasgow; Heriot-Watt University, Edinburgh etc. Ms. Shaw is the recipient of other prestigious awards, including the Nikkei Asia Prize for Regional Growth and the ‘Veuve Clicquot Initiative For Economic Development for Asia’ Award.

Her most cherished awards are the two National Civilian Awards, PADMA SHRI (1989) and PADMA BHUSHAN (2005), presented to her by the President of India for her innovative efforts in Industrial Biotechnology. She is also the Honorary Consul of Ireland in Bangalore.

Kiran Mazumdar-Shaw is an Honorary Fellow of the Academy of International Business as the recipient of the 2015 AIB Fellows International Executive of the Year Award.