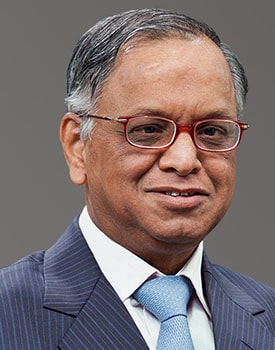 Bio: N. R. Narayana Murthy (B.E. Electrical ’67, Univ. of Mysore, M. Tech. ’69, Indian Institute of Technology, Kanpur) is the Chairman and Chief Mentor of Infosys Technologies Limited, a global Information Technology (IT) consulting and software services provider, headquartered at Bangalore, India. He served as CEO of Infosys for twenty years, handing over the reins to a fellow co-founder in March 2002. In 1999, Infosys was listed on NASDAQ (INFY).

Mr. Murthy serves as a director on the Central Board of the Reserve Bank of India, as the co-chairman of the Indo-British Partnership, and as a member of the Prime Minister’s Council on Trade and Industry. He is an IT advisor to several Asian countries. In November 2002, the Securities and Exchange Board of India (SEBI) appointed him as the head of its Corporate Governance committee. He is also the chairman of the Governing Body of both the Indian Institute of Information Technology, Bangalore, and the Indian Institute of Management, Ahmedabad. In addition, he is a member of the Board of Overseers of the University of Pennsylvania’s Wharton School, Cornell University Board of Trustees and the Board of Advisors for the William F. Achtmeyer Center for Global Leadership at the Tuck School of Business.

Mr. Murthy has been the recipient of numerous awards and honors. Recently, he was one of the two people named as Asia’s Businessmen of the Year for 2003 by Fortune magazine. In 2002, he was designated Ernst & Young’s Entrepreneur of the Year for India. In 2001, he was named by TIME / CNN as one of the twenty-five, most influential global executives, a group selected for their lasting influence in creating new industries and reshaping markets. He was also awarded the Max Schmidheiny Liberty 2001 prize (Switzerland), in recognition of his promotion of individual responsibility and liberty. In 1999, BusinessWeek named him one of the nine entrepreneurs of the year and has also been featured in the BusinessWeek’s ‘The Stars of Asia’ (for three successive years – 1998, 1999 and 2000). In 1998, the Indian Institute of Technology, Kanpur, one of the premier institutes of higher learning in India, conferred on him the Distinguished Alumnus Award, and in 1996-97, he was awarded the JRD Tata Corporate Leadership Award.

N.R. Narayana Murthy is an Honorary Fellow of the Academy of International Business as the recipient of the 2003 AIB Fellows International Executive of the Year Award.