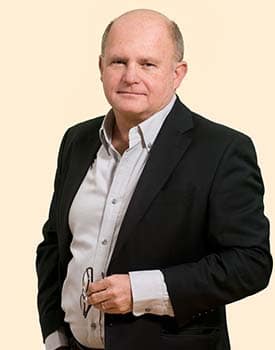 Bio: Nick Binedell was the Founding Director and Dean of the Gordon Institute of Business Science of the University of Pretoria.

After a career in business, including a period as a general manager of a division of GEC (South Africa), he began a career in academia. He completed his Ph.D at the University of Washington in Seattle, where he was a Boeing Scholar (1983 – 1986) after which he returned to take up a position as a senior lecturer at the Wits Business School. In 1992 he was appointed as Director of the Wits Business School and held that position for 2 terms of 3 years.

In 1998 he was invited to establish a new business school for the University of Pretoria to be based in Johannesburg, South Africa. His mandate was to seek to establish a world class business school that would meet the needs of the 21st century for South African business and business leaders. GIBS has grown over the past 15 years to be one of South Africa’s leading business schools and offers a comprehensive and wide range of academic and executive programmes. In addition to research and thought leadership the school has focussed significantly on partnering with leading South African companies to ensure their continued competitiveness in a fast changing country, continent and global economy.

GIBS has been ranked in the Top 50 for executive education by the London Financial Times for the past 8 years and delivers executive programmes for its partner companies in over 20 countries around the world. It has a significant MBA programme (plus 300 students p.a.) and a strong DBA / Ph.D programme and a number of Centres that reflect the dynamics of the South African economy and broader society. The school prides itself in being comprehensive in nature and its outreach programmes including working with high school leaders, social entrepreneurs, government departments and a variety of other important communities. GIBS is also well known for its innovative conferences and Forums as well as off the record dialogues for business and government to engage on key policy matters. GIBS is international in nature and it attracts a number of visiting Professors. GIBS is also active in the rest of the African continent, running programmes in West Africa, East Africa and elsewhere.

Professor Binedell’s key area of expertise is in the area of strategic leadership with particular focus on strategy in complex environments. He is a frequent public speaker in South Africa and elsewhere, is a visiting lecturer at the Rotterdam School of Management (for the past 18 years) and has been a consultant to companies like General Electric and MTN.

His early background included extensive travel and by the time he was 10, he had lived with his family in 6 countries including South Africa, Zimbabwe, the United Kingdom, Germany, Yemen and Kenya.

He is currently a Professor of Strategy and Leadership at the Gordon Institute of Business Science and is at present a Visiting Professor at the London Business School.

Nick Binedell is an Honorary Fellow of the Academy of International Business as the recipient of the 2015 AIB Fellows International Educator of the Year Award.