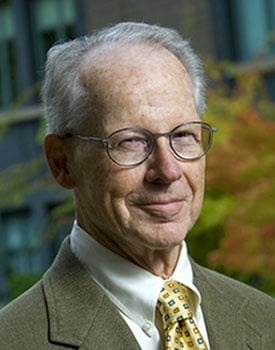 He has been awarded eight honorary degrees and is the recipient of the John von Neumann Prize and the Irwin Award for Scholarly Contributions to Management. He has been a Fulbright Professor, a Guggenheim Fellow, a Fellow at the Center for Advanced Study in the Behavioral Sciences, and is a Distinguished Senior U.S. Scientist, Alexander von Humboldt‑Stiftung.

He is the founding co-editor of the Journal of Law, Economics and Organization and the past president of the Western Economic Association and the International Society for New Institutional Economics. He has published six books and over 130 articles. He was a chaired professor at the University of Pennsylvania and Yale University before coming to Berkeley.

Oliver E. Williamson is an Honorary Fellow of the Academy of International Business as the recipient of the 2003 AIB Fellows Eminent Scholar Award.