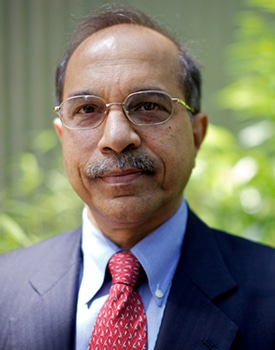 Bio: Ravi Ramamurti is CBA Distinguished Professor of International Business and Director of the Center for Emerging Markets, Northeastern University. He obtained his MBA from the Indian Institute of Management-Ahmedabad, where he graduated first in his class, and DBA from Harvard University in 1982 under Professors Raymond Vernon and Alfred Chandler.

Ravi has been involved with AIB for more than two decades. He has organized and presented at Doctoral and Junior Faculty Consortia at AIB and AOM. He served on AIB’s Farmer Dissertation Award committee for three years and chaired it in the fourth year. He has served on the JIBS Decade Award selection committee, and on the editorial boards of JIBS (1998-2002, 2006-), JIM (2000- ), Management International (2000- ), and Journal of Globalization, Competitiveness, and Governability. From 2003-2008, Ravi served on the leadership team of the International Management Division (IMD), Academy of Management. He was Program-Chair for the IM Division in 2004-05 and Division Chair in 2006-07.

Prior to academia, Ravi worked in Indian industry and government, and his subsequent research/consulting has taken him to over 20 emerging economies. He was chief consultant to the World Bank’s board to review its privatization policies, and has been on multiple World Bank missions. He is an adviser to UNCTAD on preparation of the World Investment Report 2008, and has consulted with UNDP, USAID, Fulbright, and the governments of a dozen emerging markets. He has also been a consultant to several private firms in the U.S. and abroad, and is frequently quoted in the business press.