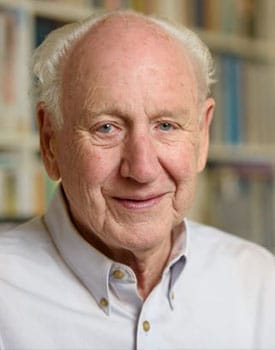 Bio: W. Richard (Dick) Scott is Professor Emeritus of Sociology, with courtesy appointments in the Graduate School of Business, Graduate School of Education, School of Engineering (Senior Research Scientist), and School of Medicine, Stanford University.  He has spent his entire career at Stanford.

Scott is probably best known for two theoretical contributions.  In the 1960s he created a conceptual schema cross-classifying rational/natural and closed/open perspectives on organizations.  This framework has proved useful to two generations of scholars as a guide to interpreting the evolution of organization theory (Organizations and Organizing: Rational, Natural and Open System Perspectives, 2007 [6th ed., with G.F. Davis]).

Later, in the 1990s, he devised an encompassing framework that incorporated the views of regulative (economic and political science models), normative (sociological models), and cultural-cognitive (anthropological and cognitive psychology models) to provide a rich and thick description of the elements involved in institutions.  This “Pillars” framework has proved to be of value to both micro and macro scholars in unpacking the intricacies of institutional systems (Institutions and Organizations: Ideas, Interests, and Identities, 2014 [4th ed.]).

Most of Scott’s empirical work has focused on (1) the distinctive structures and processes of professional organizations and (2) the effects of institutional environments on organization fields, and organization structures and processes.  Principal publications in these and related areas include: Metropolis and Region (with O.D. Duncan et al., 1960); Evaluation and the Exercise of Authority (with S.M. Dornbusch, 1975); Hospital Structure and Performance (with A.B. Flood, 1987); Organizational Environments: Ritual and Rationality (with J.W. Meyer, ed. 1983); Institutional Change and Healthcare Organizations: From Professional Dominance to Managed Care (with M. Ruef, P. Mendel and C.A. Caronna, 2000); Between Movement and Establishment: Organizations Advocating for Youth (with M. McLaughlin et al., 2009); and Global Projects: Institutional and Political Challenges (with R. E. Levitt and R.J. Orr, ed. 2011).

Scott has also been active throughout his entire career in the training and mentoring of graduate and post-graduate research scholars.  He served as the Director of the NIMH Research Training Program on Organizations and Mental Health at Stanford from 1972-1989, and as Director of the Stanford Center for Organization Research from 1988-1996.

W. Richard Scott is an Honorary Fellow of the Academy of International Business as the recipient of the 2015 AIB Fellows Eminent Scholar Award.