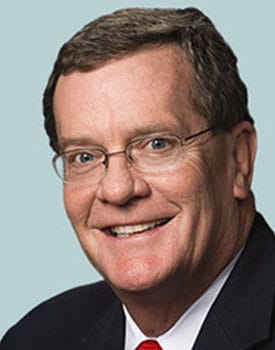 Bio: After spending his youth in Oregon, Mr. Solso earned a bachelor’s degree in psychology from De Pauw University and an MBA from Harvard. In 1971, he began his career as assistant to the Vice President of Personnel at Cummins Inc. then a small Midwestern engine manufacturer based in Columbus, Indiana. Later, he moved to the operations side of the business, including overseas assignments in England and Brazil. After 29 years in the business, he was promoted to Chairman and CEO in 2000.

Under his leadership, the Cummins team has had an outstanding financial performance including the achievement of an average annual total return of 46 percent – well above that of the S & P 500 and of the industry peer group. Moreover, the company has made significant progress in its international growth. Its global workforce of more than 24,000 employees currently serve customers in more than 160 countries through its network of 550 company-owned and independent distributor facilities and more than 5,000 dealer locations.

In addition to its financial and international growth success, the company is recognized as a leading example of an implementer of diversity and corporate responsibility. Business Ethics magazine has cited it as one of the nation’s “Best Corporate Citizens” for the past eight years, including first and second-place rankings. Fortune magazine includes Cummins as one of the “Top 50 Companies for Minorities.” The Cummins emphasis on improving communities resulted in the development of numerous projects focused on the environment, health care, education and economic development of the poor, especially in such major emerging markets as India, Brazil and Mexico. Much of this community development activity has been accomplished with the assistance of the half-century old Cummins Foundation also chaired by Mr. Solso.

Mr. Solso serves on several boards of directors including the Board of Trustees of his undergraduate alma mater DePauw University which recognized him as an Outstanding Alumnus in 2004. Moreover, Rose Human University awarded him an honorary doctorate in engineering.

Theodore Solso is an Honorary Fellow of the Academy of International Business as the recipient of the 2007 AIB Fellows International Executive of the Year Award.