Governments face an “excruciating choice” between “flattening the (coronavirus) curve” by imposing quarantines and lockdowns and the huge, unprecedented economic impact on the world economy that is already in recession. The Health and Human Services Department of the US Federal Government is planning for the possibility of an 18-month medical and economic crisis (Bublé, March 18, 2020).

While pandemics have occurred in the past, the global scale of government response verges on the unimaginable. According to a Pew Research Center report, as of March 31, 2020, 93 percent of the world’s population lived in countries with at least some travel restrictions (Connor, April 1 2020). This means that much of the world economy is either hampered, delayed, or shut down entirely (Fernandes, March 22, 2020). In the worst scenario, if prolonged, this could lead to not just a global recession, but something worse. 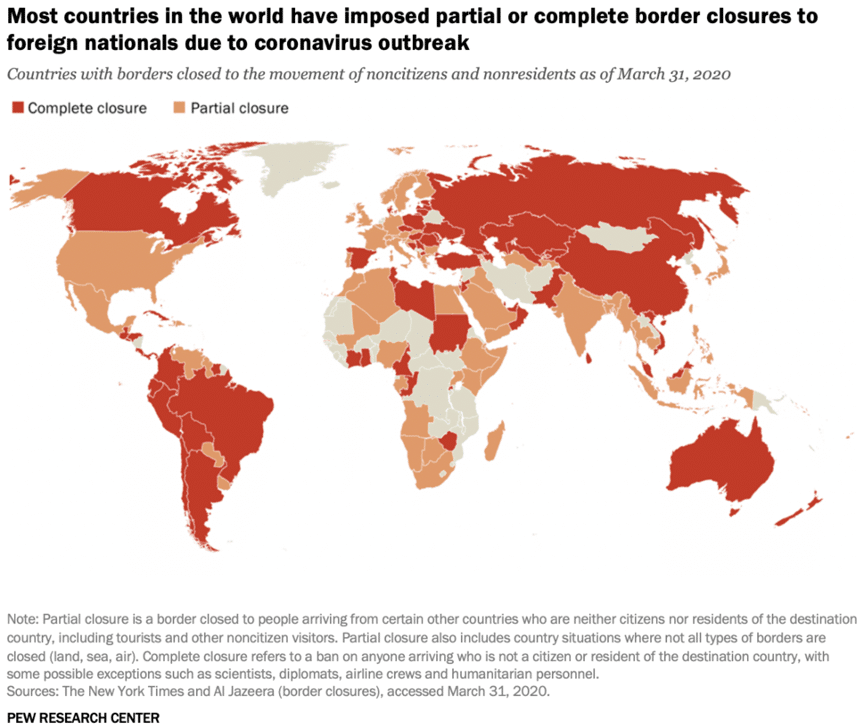 Are the “Copycat” Government Responses Worldwide Appropriate or Excessive?

What is driving this “copycat” behavior on the part of all nations? Is it an excessive reaction? What will be the consequences? A faster return to normalcy, or plunging the world into a prolonged recession? Governments are closing businesses, and imposing quarantines or travel restrictions with the idea of slowing the spread of the coronavirus. But will slowing its spread also prolong the economic anguish? Will it also reduce the number of persons eventually infected?

For readers interested in the above questions, this piece is intended as an update to my earlier post (Contractor, March 20, 2020) with additional references from medical experts and economists.  (I also caution below that there are no definitive answers yet (Knowledge@Wharton, March 24, 2020) and the estimates in the scholarly references below should be read with circumspection).

The expression “flattening the curve” is already a popular cliché. What a government means by this – and it is an admission of unpreparedness – is that, unchecked, infections would grow at an exponential rate so as to exceed the capacity of hospitals to cope with the numbers of patients. For a graph and additional details, see my earlier post (Contractor, F., March 20, 2020).

By forcing quarantines and social distancing, governments hope that the growth of the infections will slow to a rate that remains below the maximum capacity of hospital beds, equipment such as ventilators, and doctors and nurses available in their region or country. If not, the medical establishment will be overwhelmed. This is already happening in Italy, Spain, New Delhi, and New York (as of April 2, 2020). For a while, it happened in Wuhan and Hubei Province, whereupon the Chinese government introduced a severe lockdown on January 23, 2020.

But What About the Severe Impact of Shutting Down Some or Much of the World Economy?

While restrictions are being gradually eased in Hubei, scant signs of an economic recovery there are evident as yet. As the diagram in my previous post (Contractor, March 20, 2020) schematically illustrates, “flattening the curve” also means prolonging the economic dislocation, precipitating mass unemployment (perhaps more than 60 million have been laid off worldwide in just the last two weeks), bankruptcies, and the mental and physical health effects of an extended downturn in the medium to long term.

Are Governments Acting Appropriately or Over-Reacting?

Candidly, we have no definitive answers as yet. While economic papers (e.g., Bonaparte, 2020; Fernandes, 2020; Gourinchas, 2020) try to model the effects, all modeling is based on assumptions, and the current situation poses way too many unknowns or gaps in data (Stock, 2020). For example:

The degree of uncertainty in modeling is illustrated in Flaxman, Mishra & Gandy (2020) and in The Economist (April 1, 2020), where the “95% confidence” interval is itself as broad as 50 percent for more than half of the countries studied. 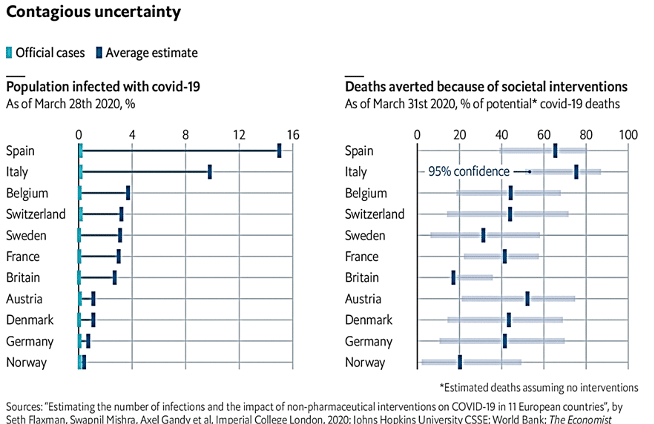 The degree of uncertainty even among medical experts is demonstrated by the estimate in the above chart, For instance, for Germany the mean “% of potential COVID-19 deaths” averted is estimated at 41 percent, but the 95 percent confidence interval ranges widely from 12to 70. For Belgium, the mean is 44, but the confidence interval ranges from 18to67. This is true for most of the countries studied.

How History Will Judge This Period

For interested readers, my earlier post (Contractor, March 20, 2020) describes the trade-offs and the excruciating dilemma for governments and describes the logic behind “flattening the curve.” In short-term health effects, there is no question that shutdowns and quarantines are the right thing to do, according to Gourinchas (2020), Correia, Luck & Verner (2020), and this graph in The Economist. But “flattening the curve” also means prolonging the world recession to an unknown extent, which itself may have grave long-term economic and health consequences. Only history will judge whether the trade-off was appropriate.

In Conclusion: Will Globalization Retreat?

For International Business, 2020 will be remembered as an inflexion point that adjusted or restructured MNC operations, global value-chains, the role of governments in regulating foreign direct investment (FDI), protectionism, the change in the behavior of managers to take risks (i.e., the uncertainty-avoidance behaviors of managers), propensity to form cross-border alliances, country-of-origin influences on consumer purchases (Samiee, Shimp & Sharma, 2005), and myriad other global business decisions – thus formulating a new agenda for the future of globalization.

Will globalization retreat? Probably not. Although there likely will be more national controls, local value-added mandates, and nationalism, the underlying logic of global business will remain valid. What is the underlying logic? Specialization and concentration – the idea that certain types of products or services, or certain functions, are more efficient (i.e., cheaper) when concentrated in certain countries or cities, from where they can be distributed locally and internationally. The opposite model – each nation trying to make everything domestically – is not only far more expensive, but also simply not feasible for most of the smaller nations on the planet.

Politics and global economics will remain in uneasy tension. The number of countries on the surface of our planet (193 at last count in 2020) is three-and-a-half times larger than the number of nations that existed in 1960. But that did not stop the phenomenal expansion of trade and FDI over the past 60 years. Nationalism and concocted patriotism course through Facebook, Twitter, Instagram, and WhatsApp. But each message recipient also knows – subconsciously – that the smartphone they are holding in their hands would cost three to ten times more if produced entirely locally.

As a consumer, which is more important to you? The satisfaction of a smug national or local identity with most products and services costing much more than they do today? Or the slight psychological discomfort that internationalization causes for your identity and self-worth while you enjoy lower prices and consequently a higher standard of living in material terms? I leave that as an open question for the future (and future blog posts).

This guest post was contributed by AIB Fellow Farok Contractor and adapted from his original piece on the Global Business blog. A full list of references is available for download.